Who loves Fall of Cybertron? Most Transformers fans, I guess. But do you love it enough to have bought it 4 times on different platforms? No? Then you’re a fully functioning human being who makes good decisions with their money!

I mean if you’re reading this you probably spend way too much on plastic robots but hey whatever.

Anyway, While War for Cybertron (WfC) was a decent, Fall of Cybertron (FoC) took the groundwork, turned it up to 11 and gave us not only a great Transformers game but a great game overall. However, both games gave some great character designs that translated into pretty blah toys. I mean not as bad the first few years of Bayverse toys, but still pretty meh Yeah some were decent, such as the Megatron and Optimus Prime WfC, but the majority of them turned out pretty bad, such as Grimlock. It took third party Planet X to take that brilliant in game design and translate it to plastic, at a lower end Masterpiece price, but it was worth it, being my favourite Grimlock and third-party toy of all time, as seen in my review.

Gratefully Planet X didn’t stop there and have done plenty of other characters, though it seems it’s been a little hit and miss. But when I saw they did a toy of Megatron in the form of Pluto, I knew that would be my second purchase from them. It took a while but he’s finally here, in all his “Soundwave used a thunderstone on him” glory.

So here we have Pluto in all his spiky glory. Word of warning? Those pointing bits ain’t for show, especially the ones on his back. They hare very sharp and I cut myself a few times on him, so be warned.

So yeah this is a pretty damn good rendering of FoC Meg’s upgraded form. And while I love the moulded details, paint and full set of articulation, he isn’t as solid as Vulcun. He’s not badly made, but his joints aren’t as tight as I’d like and his centre of balance is a bit harder to find thanks to how his legs expand to become the front of his alt-mode (specifically the weird heel). However, he can stand and when he is posed, he ain’t gonna fall over. I dunno, it’s hard to describe adequately. He doesn’t feel cheap or flimsy, but there is a certain lack of density to him that Vulcun had.

But hey that is a minor quibble because he still looks fantastic, especially when you bring in his massive purple sword. Every Megatron should have a sword rather than the flail. Yes, there are arguments to be made for a flail as a valid weapon, but swords always seemed more practical to me. Even ones like this that would give Cloud Strife a bit of trouble to lug around.

And God I love the fusion cannon here. It’s massive but doesn’t get in the way of the shoulders and the purple plastic at the core looks great on a camera flash. Be nice if it lit up, but not a deal-breaker.

Transforming Pluto is simpler than you might expect, but still fiddly. While it doesn’t feature anything like Vulcun’s “you need to BEND this bit and hope it doesn’t break” tail transformation, it doesn’t feel rather floppy until you’re finished up. But once you do get it done, it’s solid and looks fantastic.

This is very accurate to the game model…but at the same time doesn’t scream “tank” to me. I mean, it IS a tank. I know that, and it looks very cool and deadly and sharp, but I dunno. Something about it doesn’t quite work 100% and I’m not sure why. Maybe using the weapon storage for the sword will help.

Yeah, that is dumb but …it also works. I dunno it weirdly adds something while making the whole thing look sillier. Weird.

One thing I will mention about tank mode. Obviously, the arm cannon becomes the main gun. That’s a given.  And when finishing him up you have a port that the peg that holds the cannon on his arm in robot mode can go in. DO NOT USE THAT PEG. While it holds it securely, it is WAY too secure and becomes a nightmare to pull out. Every time I did this, I thought the peg would break. Instead, just let the tabs on the gun and the…I guess “cockpit” section holds it in. It’s still solid as hell and less chance you’ll break it.

I do like Pluto but he isn’t at the same level of Vulcun. I mean Planet X fucking hit it out of the park with that, so it would be a tough act to follow. Still, if you want an FoC Megatron, it’s your only option, and as a bonus, it’s a solid figure, despite and thanks to its oddities. However, be prepared to fork out more for the rest of the line unless you want him to overshadow your other FoC figures.

Beast Wars Megatron. Arguably more successful in achieving his goals than his G1 namesake, even if he did get killed by Hippie Jesus Ape. Then again, he was voiced by David “I want to have sex with that voice” Kaye, so it’s all good.

What’s not good is that my favourite toy of the character, his Transmetal 1 form, is one of the most famous victims of Gold Plastic Syndrome, the dread disease that cause integral parts of your toys to explode. I am so afraid of my copy exploding that I haven’t transformed him in about six years. So, when Toyworld said “we’re gonna bring one out in Legends scale” I was all down for it.

Pity he didn’t live up to the hype then.

Anyway, in terms of look Toyworld have nailed it, this is a DAMN good looking Megatron. The none bronze paint is glossy and the plastic quality is good. This guy definitely won’t be exploding when you glance at him. However, mainly because the second you do anything with him you’re gonna want to put him down. That bronze paint I alluded to? Chips like a motherfucker during transformation, or when you try and do anything with the turbines. 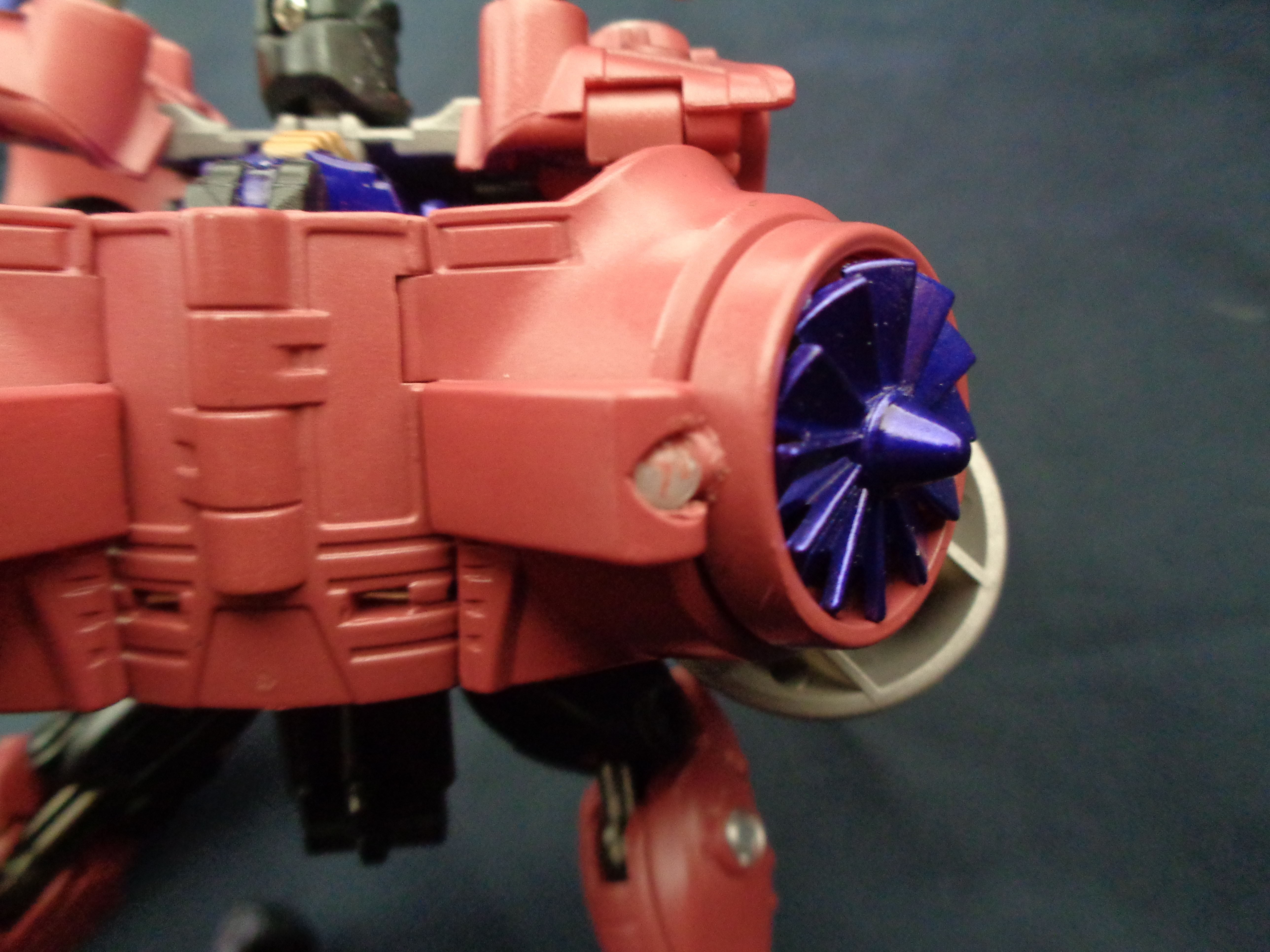 Yeah, there’s a reason Hasbro tends to cast moving parts in plastic rather than paint them, shit like this happens. I got this guy to fiddle with since I can’t do that with my original for fear of choking on bits of exploded plastic that lodged in my throat when I gave him the side-eye, but I’d rather not breath in paint chips either. 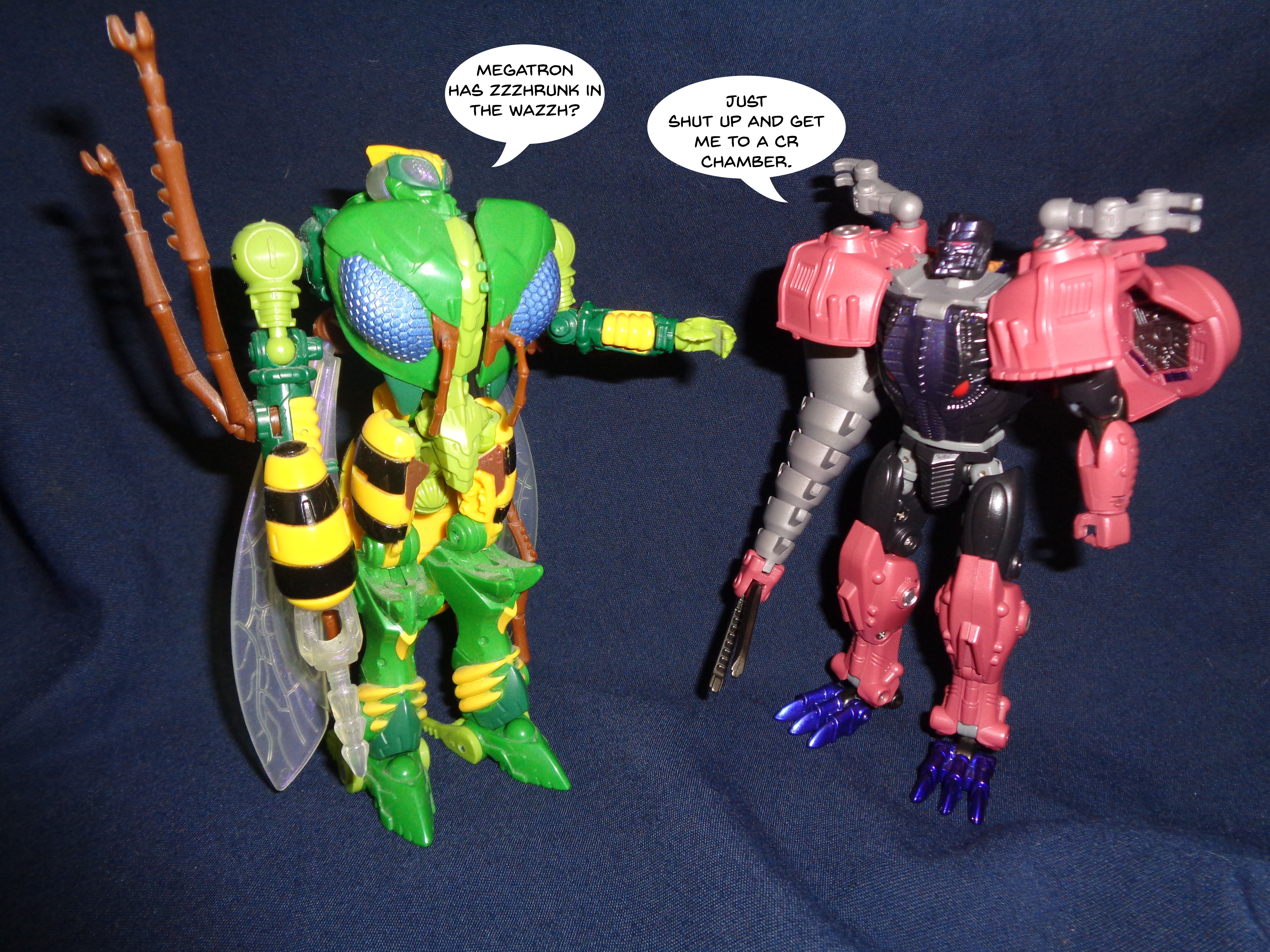 I got him for just shy of £35, with the cost rounded out with a couple of alternative heads (smirking and displease) that I don’t like, two tiny rubber ducks he can’t hold, and G1 Grimlock’s sword cast in purple that he can hold but looks way too big for him. I dunno if this is better or worse than his classic tail flail blaster thing, which he CAN hold as shown, but there’s no definitive tab or peg for him to grab.  You have to insert the hand into the tail-void (title of his sex-tape) and it takes an age to find the sweet spot, while chipping the paint on his hands. It also weighs down his arm too much to pose decently.  Regarding his articulation he’s got quite a good set including waist and ankle-tilts. While most of the joints on mine are fine, his right knee is floppy and I can’t seem to tighten it any further. 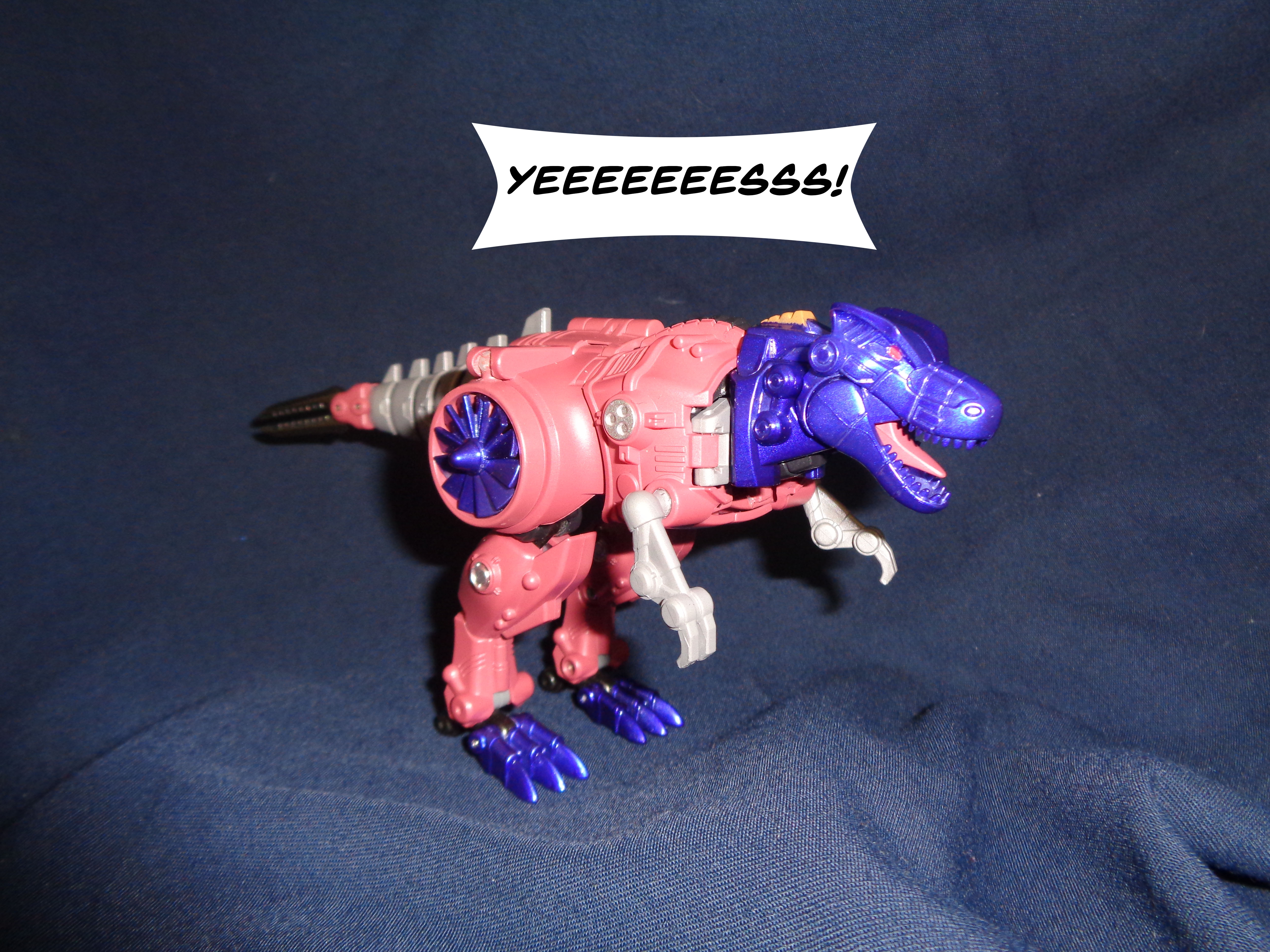 T-Rex mode is GORGEOUS. Yeah, it’d be hard to fuck up the original toy’s design but oh this gives me good feelings in my stomach. I especially like the head sculpt, with the slightly blockier cartoon look compared to the rounded toy.  Even has a smidge of articulation so he can look up. He also has a waggling tongue for god knows why. I also really like how his lower legs can become digitigrade, making him look a bit more beastly. Transforming him is quite fun but fiddly due to his size and I’m not 100% sure can be done in a way that won’t scratch the paint off somewhere. Plus, he can still do the rollerblading t-rex with a jet pack look for that extra 90’s charm.

So…do I like Beast General? Sort of. It’s a transformable toy of one of my favourite Megatron incarnations that won’t disintegrate in my hands, but he’s got a lot of stuff holding him back that makes him a bit disappointing. Maybe pick him up in a sale?

As for where I’ll display mine now… 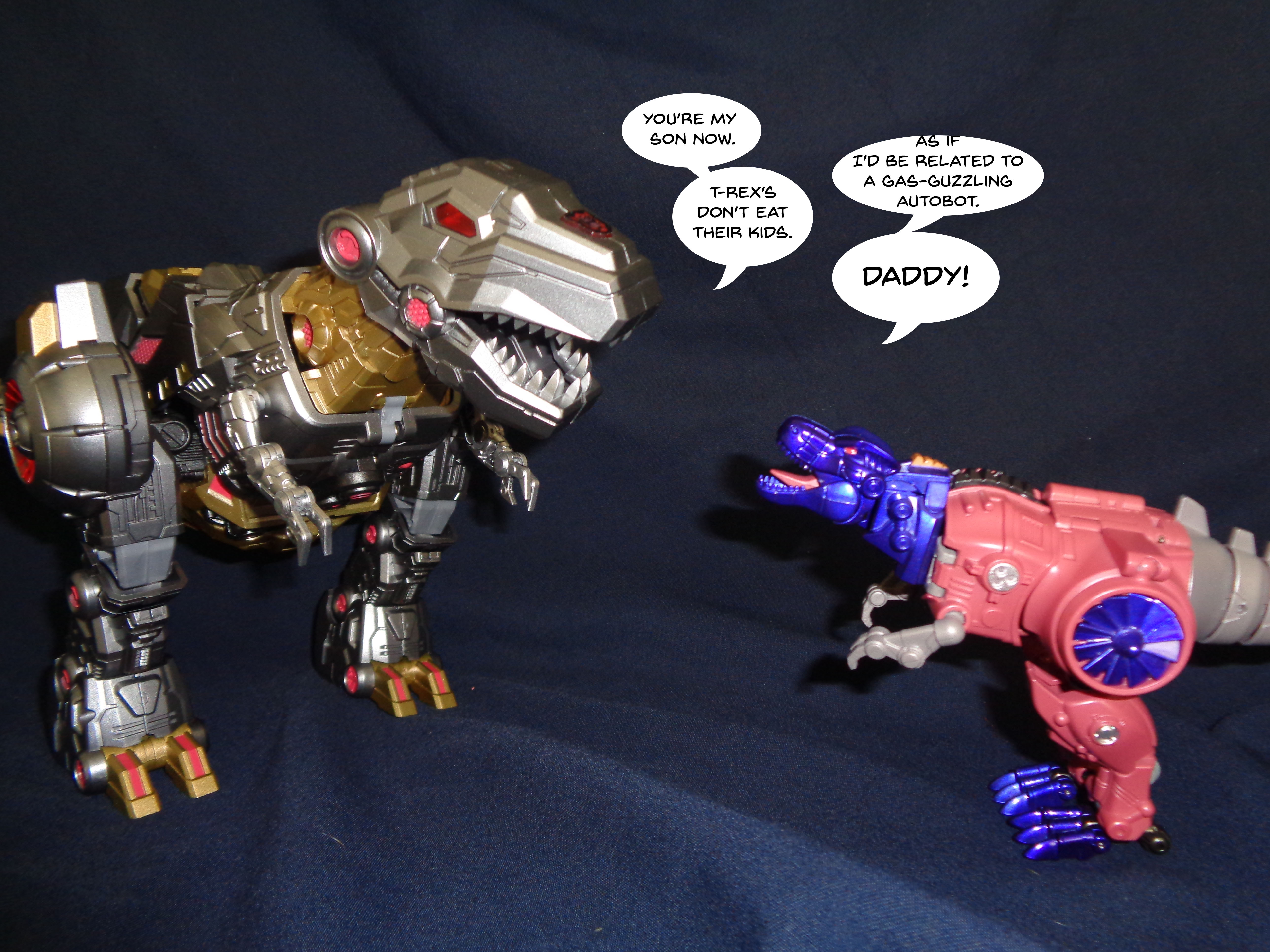